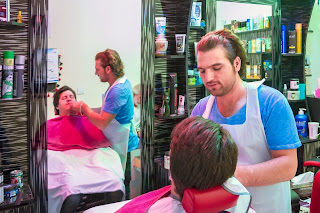 He reaches for a can of Red Bull, downs it in several gulps, tosses it in the trash and wipes his mouth with the back of his hand. He held any number of jobs in mobile phone companies, restaurants, tea and jewelry shops before he became a barber. Then his family moved to Parwan Province outside of Kabul where there was no work. He wondered, What should I do? and decided to return to the city where he apprenticed for a friend of the family, a barber. He slept in the barber’s shop beneath a table after the shop closed. He named the cockroaches that scuttled by his face. He spent all of his days and nights there. He watched YouTube videos to learn about modern haircuts the barber refused to teach him because he was a conservative man and disapproved of western fashion. He provided Uresh with a small allowance with which he bought food for his family.
--That was my life. Now I’m twenty-five and I have this shop. but I don’t define my life by what I have. I’m not happy.
He looks at me for a long moment before he asks if he can trim my beard.
--You look like the Taliban, he scolds.
He gestures toward a chair. I sit down and he wraps a white cloth around my neck and drapes a black sheet over my chest. Taking an electric razor, he adjusts the blade before he lifts my chin. I close my eyes and listen to the hum of the razor and Uresh.
After he completed his apprenticeship, he and another student started their own hair style business. Four years later, they sold the shop and Uresh opened this one after a customer offered him the space. He has been here a year and earns from ten dollars to one hundred dollars a day. His mother gets angry with him for not wearing a salwar kameez to work. He tells her he can’t. He must look modern for his customers.
His father, he thinks, would be proud of him. He had been a lieutenant in the mujahadeen and died in the civil wars of the 1990s. Men who served under him are now commanders in the Afghan National Army and in Uresh’s opinion have grabbed everything of value for themselves. They drive armored cars, live in gated communities. They are happy. They can leave Afghanistan when they want. None of them came to Uresh’s house when his father died. None of them offered to help his family. It was left to him to take on the responsibilities of his father.
He shuts off the razor. Looking in the mirror, I see that my once bushy beard has been cut close to the skin. Uresh smiles his weary smile.
--Close your eyes, he tells me.
He flicks a brush over my face, removing stray hair. He wants to live outside of Afghanistan in a country where he’ll feel safe, some place he could call a new homeland. He remains in Kabul, however, because of his mother. If she let him go, he would leave this minute. But he can’t leave without her permission. He has tried to persuade her to find him a wife outside of Afghanistan. He would marry that girl and become a citizen of her country. Sweden, Germany, somewhere. He would live there legally and send for his mother. But she refuses and he can’t go because she depends on him. If he knew someone to look after her, he would take a bus and go to Iran as others have done and from there travel to Turkey and then Europe. Risky, yes, but it would be a chance at a better life. However, Uresh’s mother wants him to stay and meet a good Afghan girl. He has not told her he has a girlfriend. If he did, she would want them to get married. Then they’d have children and it would be that much harder for him to escape to Europe.
--You can get up now, Uresh tells me.
I offer to pay but he refuses. Instead, he hugs me and tells me how good it is to see me. I’m happy to see him, too, flattered by his attention but depressed by his sense of hopelessness. My feelings are like an intense, magnified experience of teaching––running into a student I’d mentored at one time, who is doing well, but whose future somehow falls short of what I might have hoped. What difference can any of us make especially when you walk away?

Hours later, after he closes for the night, Uresh catches a bus home. It carries him past the home of Mohammad Qasim Karbalaye, a mender of broken bones. When he was a young man, Mohammad worked as a laborer. Short but powerful, he could do in one hour what it took other men a week to complete. He had never thought of helping people with physical ailments until he assisted a wrestler from Uzbekistan with a dislocated shoulder. He punched it back in place and the Uzbek told him he should go into business and doctor others as he had him. Mohammad opened a shop and the Uzbek would sit with him and people assumed that like the Uzbek he, too, was a wrestler, and they started calling him the Wrestler. Other than his wife and son, Mohammad does not know any other living person who knows his true name. He has been doing this kind of work for almost fifty years and has been called the Wrestler for so long he sometimes doesn’t answer his wife when she calls him Mohammad.
On this evening, a woman walks in carrying a boy just twenty days old. His right elbow juts out at an odd angle. Mohammad rubs the arm with car grease. He tells the mother to leave the grease on the child’s arm for three days to lubricate the joint. Then come back, he says, and he’ll fix it. 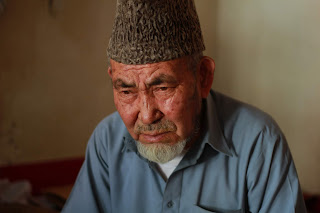 The woman departs and an elderly man leaning on a cane enters. A thick bandage swaddles his left hand. Mohammad examines it.
--Leave the bandage on for another week, he says.
The man leaves, his cane making small dents in the dirt floor. Outside, moonlight sweeps the street with a white, shivering glow and Mohammad sips tea and stares through the light at nothing. He has seen with his own eyes how much worse Afghanistan has become. Day by day nothing goes right. In Jalalabad, the wife of a man with five daughters gave birth to a son. The man fired his gun into the air with happiness. A Taliban commander said, Why are you shooting your gun? My wife finally had a son, the man explained. The commander took the two-day-old baby and crushed his head with the butt of his Kalashnikov. Then he shot the father. The father’s cousin told Mohammad about this when he came in to see him for back pain. Some people didn’t believe him but Mohammad did. He knows these things happen. He doesn’t need evidence. Living in Afghanistan is evidence enough. After September 11th, everything was fine and then it wasn’t. Nothing is sustainable. That is why everyone skips the country. He thinks of leaving, too, but how can he? Where will he go? Who will pay his expenses? He worries about these things. He’ll go if someone pays his way.
Mohammad sits back and rubs his face. Another patient arrives. This time, a young woman and her husband. The woman lifts her swollen right foot. Mohammad examines it with the tips of his fingers. He advises her to put grease on it for three days. Her ankle had become solid, he explains. Grease will loosen it.
He watches the couple walk out. If he had money, obviously he would leave Afghanistan, why not? If his patients had money, they would see a doctor and not him. For some people, there are no alternatives. 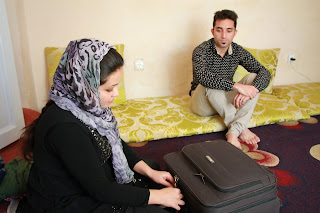 --Don’t cry, Shekib tells her now. Afghans are very courageous. We don’t cry.
--It will be the first time I’ll be apart from my family, she says. I am seven months pregnant and I will be without my husband.
Shekib’s father, Shaiq Hamid, stares out a window, eyes brimming with tears. He worries and nervously runs his hands through his thinning, gray hair. He has friends stuck in Iran. They have children and children don’t run as fast as adults and they may need to run from police, border guards and God knows who else. Like children, a pregnant woman can’t run fast, either. The smuggler will pay the police to look the other way but they have only so much money and there are many police. They can’t pay them all.
Shekib’s mother, Sham Sad, also struggles to hold back tears. She wears a black, body-length veil and only exposes her face to her family. Wiping her eyes, she stares at the floor to conceal her sorrow. She knows the trip will be long and difficult for Yazdi. That is the way for Afghan women. They must suffer. Carrying a baby and clothes and food. God will be testing her. She should buy sneakers. Better to walk in.
Sham remembers baking bread when rockets fell around their house during the civil war years. She had to run and seek shelter with her children only to return later to finish baking bread; otherwise, they’d have no food. As her grandchild grows, he or she will take care of her one day. That is what women hope for, the love of their children and their grandchildren.
--I have to get you a mobile phone to call me, Shekib tells Yazdi.
--You have to give me some of your clothes to pack.
--I’ll need them here.
--No, I’ll keep them so that I know one day you will come to me.

Before I return to the States, I meet Uresh one last time at the Herat Restaurant, where I used to take him for lunch every day in 2003. The Herat has changed dramatically since then. The once roughhewn interior with its concrete floor and warped wood tables has been completely remodeled. It now has white, tile floors, glossy glass tables, and bright, glaring lights. Its prices have nearly quadrupled.
--You see improvements like this and you think we’re becoming a modern country, Uresh says noticing my open-mouth surprise. Then a bomb explodes. Nothing is certain in Afghanistan.
We take a table and order a plate of beef kabob and two Cokes. As we wait for the food, Uresh shows me photographs of his girlfriend on his cell phone. She has a wide, open face and a generous smile. An orange headscarf covers her hair. Uresh tells me she wants to leave Afghanistan.
--Let’s go, she says, and then we’ll marry in Europe, but he demurs. Her family, he believes, would kill him.
--Why? I ask.
Before he answers, Uresh takes back the phone and deletes her pictures. If he was to lose it and her family found it with her photos, they’d shoot him, he says.
--They believe she should marry within the family, Uresh says. That is the Afghan way. They don’t want their daughter with a poor boy.
--That makes no sense, I tell him.


He puts the phone down, and faces me. The exasperated look on his face suggests I’m the one who doesn’t make sense.
--This is Afghanistan, he says, as if that alone explains everything.

J. Malcolm Garcia is a freelance writer. His most recent book, Riding Through Katrina With the Red Baron's Ghost (Skyhorse), was published in August 2018.

All photographs by Zabiullah Fazly.

Posted by Mark Hummel at 8:56 PM No comments: