His hands wavered and quavered within the space of open air, but once they took hold of yours the trembling settled and you were surprised at the strength of his grip, the guiding power of his hand.  I am certain every student wanted to be chosen to become Mr. Reed’s hands.  Chosen, you negotiated the new terrain of allowing your own hands to become a conduit, found a balance point between executing the line the hand on top of yours requested and placing enough confidence in the steadiness of your own hand to complete that bidding.  The feeling was altogether foreign. He whispered commands, trying to stay a millimeter ahead of your hand, and you listened with absolute concentration. At the end of a demonstration, just before Mr. Reed distributed completed drawings of the next assignment and told Philip Lucero to cue the day’s music, often you marveled at the work before you on the table, and you felt the press of his hands long after they left yours.
Mr. Reed stopped teaching altogether after that year, and we heard news of his death a few years later, but if I try hard enough, I can still recall the press of his hands guiding mine.

(Mark Hummel is the editor of bioStories.)
﻿
Posted by Mark Hummel at 11:25 AM No comments:

Someone to Lean On 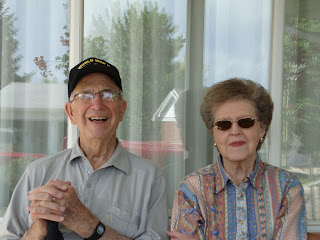 Al and Jean Leichliter (photo by Pam Leichliter)﻿
Posted by Mark Hummel at 10:34 AM No comments: